The Qingming or Ching Ming Festival, also known as Tomb-Sweeping Day in English, is a traditional Chinese festival on the first day of the fifth solar term of the traditional Chinese lunisolar calendar. This makes it the 15th day after the Spring Equinox, either 4 or 5 April in a given year. Other common translations include Chinese Memorial Day and Ancestors’ Day.

Qingming has been regularly observed as a statutory public holiday in China. In Taiwan, the public holiday was in the past always observed on 5 April to honor the death of Chiang Kai-shek on that day in 1975, but with Chiang’s party currently out of power, this convention is not being observed. It became a public holiday in mainland China in 2008.

The Most Important Day of Sacrifice

Qingming Festival is a traditional Chinese festival and an important day of sacrifice for most people (including the Han Chinese and China’s 55 other ethnic minorities) to go and sweep tombs and commemorate their ancestors. On this day, tomb sweeping is one of the most important and popular activities to show respect to ancestors.

There are various activities for Qingming Festival. The most popular ones such as tomb upkeep and repair, spring outings, kite flying, and putting willow branches on gates have been an important part of this festival since the beginning. 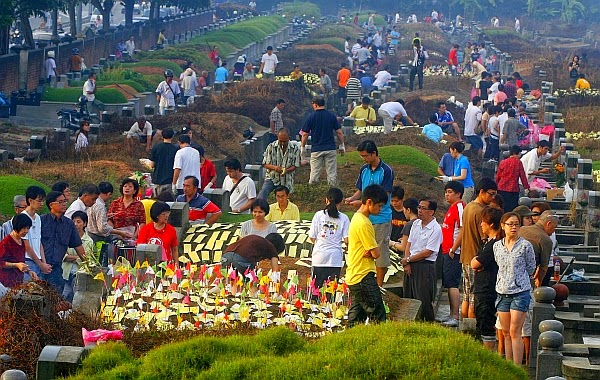 People often participate in a sport to ward off the cold and in anticipation of the arrival of spring. The festival integrates both reverence and fun through its customs.

The day before Tomb Sweeping Day was the traditional Chinese Cold Food Day. As time passed, the two festivals were gradually combined into one. On the cold food festival day, people used no fire and only ate cold food. Now people in some places still have the custom of eating cold food on Qingming Festival.

Different places have different foods for Qingming Festival. The traditional Qingming festival foods include sweet green rice balls, peach blossom porridge, crispy cakes, Qingming snails, and eggs. These foods are usually cooked one or two days before the arrival of the Qingming Festival so people can eat and recreate during the holidays.

Sweet Green Rice Balls (青团 qīngtuán /ching-twann/ ‘green dumpling(s)’) are a popular Qingming food that are made of a mixture of glutinous rice powder and green vegetable juice and stuffed with sweetened bean paste. Sweet green rice balls are jade-green in color, glutinous in taste, and sweet in aroma. 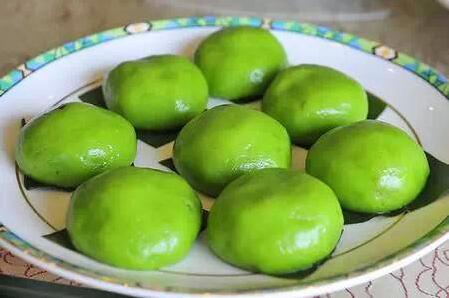 Qingming cakes are called sazi (撒子sāzi /saa-dzuh/ [phonetic]) or hanju (寒具 hánjù /han-jyoo/ ‘cold tools’). They are a crispy fried food that are made of wheat flour or glutinous rice flour, eggs, sesame, onion, salt, and other ingredients.

Among some Chinese ethnic minorities, such as the Uygur in Xinjiang, the Dongxiang in Gansu, the Naxi in Yunnan, and the Hui in Ningxia, sazi is famed for its great variety and many flavors.